The Bear's Owner was the cruel wealthy owner of the Mr. Bear that lives in Beary Manor.

Main article: Volume 1: The Birth of Arale
He appears in Bearly Friends! where he has Mr. Bear captive in a small cage in his yard. He approaches the cage and intended to get him big soe he can be stuffed and hits his cage. Later that night, Arale rescued the bear and replaced him with a small stuffed bear that she made and when he woke up he is seen apologizing to it thinking that it was a result from not feeding him enough.

In the remake, the owner was going to use the bear for a costume instead of stuffing him. 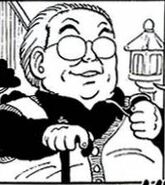 Bear's owner in the manga
Community content is available under CC-BY-SA unless otherwise noted.
Advertisement