"The Invader from Space"

"The Invader from Space"

Bubibinman (ブビビンマン; lit. "Buzzingman"), later romanized as Buzzoman, is a fly-like humanoid superhero from the planet Haebunbu, who first appeared in the 16th chapter of Dr. Slump, The Invader from Space. His anime debut was in the 69th episode of the same name. He has since appeared in Dragon Ball Super.

The Invader from Space

Bubibinman came to Penguin Village intending to become a superhero like Superman/Suppaman, being sure that he could do a better job. Shortly after arriving on Earth, he is spotted by Arale Norimaki playing outside, and she throws as oil drum which hits him squarely in the face. In an attempt to prove himself as a powerful alien superhero, he unsuccessfully attempts to lift 200 tons of weight, and challenges the girl to a sumo match. This results in Arale slamming him so hard he bounces off the moon before landing back on Earth. Wondering at all the noise, Senbei Norimaki comes out, and questions his identity as an alien before Bubibinman attempts to show off his flying abilities before mistaking Gatchan for human and becoming discouraged. He is then insulted by the likes of the Doctor and Akane Kimidori before discovering a parking violation attached to his spaceship. While Arale plays with Poop nearby, he smells it and mistakes it for food. Much to the Penhuin Villagers' disgust, he eats some of the poop and finds it delicious. He then asks for more, as Senbei tries to kill him with bug spray.

He is seen collecting poop on a star-shaped planet in "Zippity-Doo Doctor". While collecting and eating poop on Earth in the chapter "Cute Delivery Boy from Hell", Bubibinman is attacked by the young demon Chivil. He survives the attack, thinking the explosion came from the giant poop he was eating.

He is seen among the residents of Penguin Village running after Arale and Gatchan in "Penguin Village Dom-Dom-Dom!" He is a seller in "The Ho-yo-yo Gang, Part 1".

In the Dragon Ball episode "The Tournament Begins", a billboard with Bubibinman in a blue outfit is seen when Master Roshi and his students arrive in the city.

Later, during the General Blue Saga, Goku meets Bubibinman in Penguin Village. He asks him if he seen General Blue, but Bubibinman shakes his head to say no. He appears in Dragon Ball Super episode 70 where he lands on a baseball that get hits out into space. 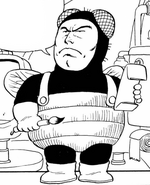 Bubibinman in his spaceship writing poetry 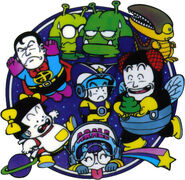 Art of Bubibinman and other Dr. Slump superheroes and monsters

Retrieved from "https://drslump.fandom.com/wiki/Bubibinman?oldid=21852"
Community content is available under CC-BY-SA unless otherwise noted.