Caramel Man 001 is a fairly large robot with a head of Astro Boy. It runs on batteries, and needs a human operator inside of it.

The robot was built by Dr. Mashirito to wreak havoc on Earth, and it can break the Earth with a punch. After learning that Arale Norimaki was stronger than his creation, Dr. Mashirito went to Penguin Village where his robot was indeed easily beaten by Arale. When Mashirito quickly got out of the robot to try to steal Arale's glasses, Caramel Man 001 was eaten by Gatchan.

He ends up being rebuilt and makes an appearance in the finale alongside the other defeated Caramel Man and the ghost of Dr. Mashirito.

A giant version of Caramel Man 001 is used by Dr. Mashirito in the films final battle and is defeated by Arale.

Caramel Man 001 was made into a figure. 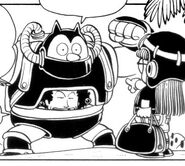