Chivil,[1] (チビル Chibiru) also known as Tivil and Chiquidiablo (Little Devil) in the Latin American dubs of both shows,[2] is a small imp occasionally seen playing with Arale Norimaki and the Gatchan. He is three years old when he first appears in the series.[3]

Chivil rides around on a dragon named Taxi Dragon. He can fly using the wings on his back,[1] and he has the ability to summon the night.[2] Originally sent to Penguin Village from Mount FlapFlap to search for souls for his master, Chivil eventually finds that he would much rather play with people than kill them.[1] This is due in no small part to Arale's persistence, though he still takes a shot at it every once in a while.[2]

The siblings also appear in Cinderella, the Musical. 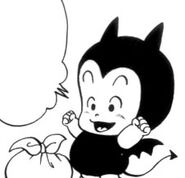 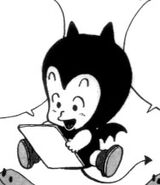 Chivil tells his work to Senbei.