Which Will It Be?

The chapter cover features Arale dressed as Shin Hayata, the protagonist of the original Ultraman series standing before a chart featuring statistics for the sizes and abilities of Godzilla, Gamera, and Senbei, whose only ability is that he drools.

While staking out the Norimaki Residence, Dr. Monster reflects on the purpose of his impending nefarious deed. While visiting the Bookstore, Dr. Monster saw a copy of Everyman's Monster Encyclopedia Deluxe, which he was unable to afford at its fourteen dollar price tag. Despite his attempts to get the shopkeeper to lower the price, it remained firm, resulting in Dr. Monster needing to rob a house to afford it, which he affirms to the reader.

Inside his selected residence for burglary, Arale makes a spare head, which is far too adult for a kid like her, making Senbei reattach the original head before sending Arale out to buy him some cigarettes. Outside, she encounters Dr. Monster lurking on the porch and frightens him as he tries to make an excuse for his being there before realizing that by kidnapping Arale, he can use the ransom money to pay for the book. He offers to buy her anything she wants if she comes with him. She agrees, and as he spirits her away on his bicycle, she asks for Gamera.

Not having expected this, Dr. Monster crashes the bike before buying her a baby turtle, soothing her observations that he had looked bigger on TV by saying it was a baby Gamera. He then ties her up in his apartment at King Ghidra Heights and leaves to call Senbei with the ransom offer. However, remembering the Doctor's cigarettes, Arale breaks free to go and buy them before returning home just before Dr. Monster calls. Not knowing the situation, Senbei puts Arale on the phone, and she quickly returns to his apartment to get her baby Gamera.

However, Arale forgot to recharge with her bottle of Robovita-A. Back at Dr. Monster's, he asks her to stay still while he re-attempts his ransom call. However, just as he thanks her for her cooperation, she runs out of energy, and goes completely stagnant. However, as it gets late, Senbei calls around to see if anyone has seen Arale, knowing that she would be without power soon, he invents the K-9 Robot and has it sniff Arale's panties in order to track her down. Back at Dr. Monster's place, a doctor declares Arale dead for her lack of a pulse, just as Senbei arrives and distracts everyone long enough to recharge Arale, and promptly ground her. However, as thanks for their day together, Arale sends Dr. Monster a lizard she found in her garden, believing it to be a baby Godzilla, and wishing that when they were adults that they would have them fight. 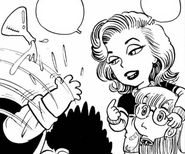 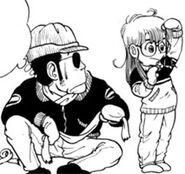 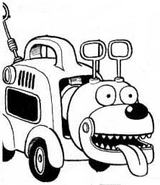 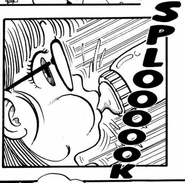 Dr. Monster's baby "Godzilla"
Add a photo to this gallery
Retrieved from "https://drslump.fandom.com/wiki/Dr._Monster_(chapter)?oldid=22944"
Community content is available under CC-BY-SA unless otherwise noted.