For the manga chapter, see The Fairy Tale Machine.

The Fairy Tale Machine (おとぎ話マシン) is an invention by Senbei Norimaki that fires a ray that brings the user into any book.

The Fairy Tale Machine is a ball on a stand that wears a hat, glasses and holds an umbrella. Senbei was originally going to use it to transport himself into a dirty magazine, but Arale Norimaki uses it to go into the story Momotaro The Peach Boy with Gatchan. She ends up bringing Momotaro and the ogre kids into the real world.

The Fairy Tale Machine is seen again in "The Siverman Cometh", sending Arale, Gatchan, and the Shiverman into a book titled The Great Adventure of King Kong. He brings Arale and Gatchan back to the real world, but not the Shiverman, who stays in the book and is "adopted" by King Kong. 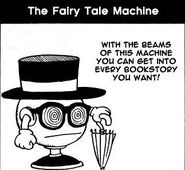