Fly Milk is a motorcycle gang that appears in the chapter "Riders at Dawn". They hang in a bar called Fly Milk, and their rivals are the Mosquito Milk gang.

Fly Milk delivers milk in Penguin Village. There are three members in the gang: the leader, a member who looks like Tori-bot, and a short member who looks like the boss. Arale Norimaki and Gatchan briefly join the gang. They leave after witnessing that the Fly Milk are not that bad, confronting their rivals, the Mosquito Milk, by playing at several different games instead of actually fighting.

The gang briefly appears in "Penguin Village Dom-Dom-Dom!", and the boss is seen among the Penguin Village residents running after Arale and Gatchan.

The Fly Milk gang in the remake 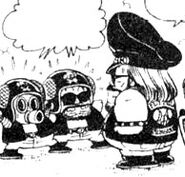 The Fly Milk gang in the manga 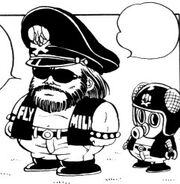 The leader with the Toribot-like member
Community content is available under CC-BY-SA unless otherwise noted.
Advertisement