Thunder Ogre Goronbo, known as Kaminari Gorosuke, in Japanese is an ogre who lives in the clouds and controls the weather. He is also the weather man on TV and also has a girlfriend named Pikako.

His appearance alters between a single horn on his head to two throughout the series.

He appears in Pink where he is a child and was being held captive by the Silver Company and rescued by Pink and Cobalt Blue.

In It is! ...not there, the anime adaptation of Something's Missing!, Goronbo is seen playing his thunder creating drum set as a metaphor for Senbei Norimaki's shock that Midori is nearby while he is wearing the See-Thru Glasses.

In Which Will It Be? he is seen on a cloud surprised when Arale Norimaki jumps really high up into the sky when she is trying out for the athletic team. In the chapter's anime adaptation, Arale-chan Goes to School, He is seen watching TV with his assistant before Arale jumps through his cloud and then starts dancing with rain and lightning coming out of him happy that he found a human child.

Main article: Volume 2: Arale on the Loose
He plays a prominent role in "Arale Flies the Skies!" where he disappoints Senbei with his weather report by talking about his date with Pikako instead. Arale and Taro later crash onto his cloud using Senbei's Cola Plane and cause Goronbo trouble by messing with his weather altering equipment. After realizing he is almost late for his date with Pikako, he takes Arale and Taro on his flying cloud and drops them off back on the surface, but unfortunately, he misses his date and did not get his rain check.

Thunder Ogre Goronbo is seen again in "Arale's Big Change" as one of the people surprised at Arale's new sudden behavior.

Main article: Volume 4: The Happy Doctor
He has a cameo in the chapter "The Dumbfounded Doctor", when Senbei and the others come back to Earth.

Main article: Volume 7: My Toilet Paper
He is seen following Arale and Gatchan on his flying cloud among the residents of Penguin Village in "Penguin Village Dom-Dom-Dom!" 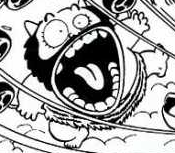 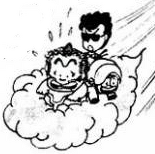