Jump Ultimate Stars (ジャンプアルティメットスターズ, Janpu Arutimetto Sutāzu) is a fighting video game developed by Ganbarion and published by Nintendo for the Nintendo DS. The game was released in Japan on November 23, 2006. It is the sequel to Jump Super Stars.

Jump Ultimate Stars preserves many of the features in Jump Super Stars and improves upon them through sheer quantity, rather than deviation. Jump Ultimate Stars appears like an improved version of Jump Super Stars through the addition of much more Shonen Jump series (such as Kinnukuman, Hokuto no Ken, and Ninku) and more abilities for characters of major manga series (such as Dragon Ball, Naruto, Bleach, and One Piece). The game boasts 305 characters (56 of which are fully playable) from 41 different Shōnen Jump manga series; however, the characters from Hikaru no Go and Mr. Fullswing do not return in this sequel and Steel Ball Run has since been revised into a story arc within JoJo's Bizarre Adventure. Almost all of the Battle characters are also Support and Help characters. This is also true for Support characters being Help characters. However, the exception is Sasuke Uchiha, Raoh, Frieza, Kid Buu, and Heihachi Edajima; these characters do not have a Support character koma ("panel" in Japanese), but they do have their Help koma alternative.

Like its predecessor, the game was not released outside of Japan largely due to international licensing issues for the plethora of series represented.

Character selection and usage are only possible through the koma; koma appears structures that take up square areas on the lower screen of the Nintendo DS. A koma depicts a character from a particular series with a simple picture (one square) or appearing to do something tied to a certain section of his manga series (detailed with a statement on the koma). The bulk of the gameplay is based around using koma to create decks on a four by five grid.

Koma comes in various shapes and sizes, taking up one to eight blocks. There are three kinds of koma that can be initialized in battle: Battle, Support, and Help komas, with decks needing at least one of each type and an assigned leader before being playable.

During battles, players use their Battle komas to attack opponents, defeating them once they have taken enough damage or have knocked them off the stage. New komas can be unlocked by clearing challenges in Story mode, or evolving existing komas using gems collected in Story mode to unlock new paths and komas, such as stronger variations of Battle koma. The stronger type will deal more damage to the weaker type.

Jump Ultimate Stars has been changed slightly from the gameplay of Jump Super Stars. Jump Ultimate Stars gives battle characters the ability to dash and to do a new attack while guarding, which, instead of breaking the guard of the opponent, forces them to change characters, and can be identified by a green glow coming out of the characters which executes it.

Battle characters now have a new ability known as Ultimate Actions (UA). These UA are different for each character, as some recover health, others recover SP, while others can be used to dodge enemy attacks.

Another new feature added is the Evolution Chart. This area allows players to upgrade their characters by spending gems (currency earned for KO'ing opponents) to buy a new koma. Each character has a chart, starting from the one block help koma and branching off into the two and three block Support and the four to eight block Battle koma. Some characters have alternate block paths which unlock a different type for that character (e.g. Goku as a Laughter type instead of a Power type), while others can be used to unlock koma for characters from the same series, quizzes for the series, and new worlds in the Story Mode.

Battles commence in arenas made to look like the page of a manga. Each arena has a unique background and obstacles based on the different manga series. They also contain a variety of different platforms. Many are static while others will move, break, or disappear and reappear randomly. Certain walls and floors are also destructible.

There are 56 playable characters in this game.

This is a list of represented series in Jump Ultimate Stars. Most of the main characters from each series appear as characters within the game. There are 24 returning series with the addition of 17 new ones (the asterisk marks newly included series), concluding 41 in total. 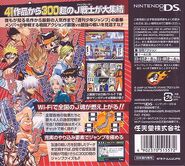 Add a photo to this gallery

Retrieved from "https://drslump.fandom.com/wiki/Jump_Ultimate_Stars?oldid=22831"
Community content is available under CC-BY-SA unless otherwise noted.