The Niko's are a race of space aliens from Planet Nikochan led by the evil King Nikochan.

They come in all different colors. It is revealed that their butts are on the top of their heads, that their nose is in the antennae (which is very unfortunate because if they fart, it would go straight to the nose),[1] and that their ears are on their feet.[2] Their definition of beauty is also shown to be very ugly for humans and vice versa.[3]

When they laugh too hard, they open their mouths really wide and sometimes get stuck.

There are only 83 Niko's in existence, all residing on the tiny Planet Nikochan which is 2000 meters in diameter. King Nikochan and his servant are the most prominent members of this race and both are known for being evil planet conquering space pirates. Despite this, the Niko's are actually a friendly people who make a living as radish farmers, living very simple lives with very little technology and no advanced cities, and they are known for growing the tastiest radishes in the universe. Despite their simple nature, they see King Nikochan as a hero and admire his planet's conquering ways.[4] 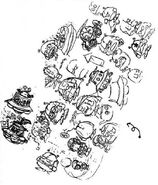 Some initial sketches of the Nikos (Dr. Slump volume 17)