The Norimaki Residence is the home of Senbei Norimaki and, later, the rest of the members of the Norimaki family.

Its address is 1 Flying Squirrel, Dr. Penguin Village, Gengoro Island. The residence has two floors and a basement. Senbei once created a miniature version of the house, to control what happen to it and its residents.

The laboratory is the first room seen in the Norimaki house. This room is located on the second floor of the house, and it is divided into two parts: the actual lab and a small workshop. The lab is where Senbei created Arale Norimaki and many of his other inventions. He spends most of his time in the workshop, working on his inventions.

Two bedrooms are on the second floor. One is for Senbei, Midori Norimaki and Turbo Norimaki. The other is for Arale Norimaki and the Gatchans.

The bathroom is a typical Japanese bathroom beginning with a small room where clothing is stripped off and then the next room consists of a bathtub. It is located on the first floor, next to the toilet. The bathroom is first seen in "Is It a Girl? Is It a Boy!?".

The living room is located on the first floor. It has an armchair and a table. It is first seen when Senbei gives Arale her clothes that he got for her at the store.

The library is where the TV is located. It is located on the first floor of the house.

The kitchen is located on the first floor, next to the library.

The basement is where Senbei stores his inventions and other vehicles like the Super Mecha "Ping-Pong".

The Norimaki Residence in the Dr. Slump remake 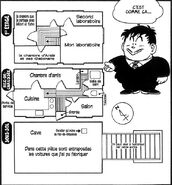 Map of the residence

Map of the residence
Community content is available under CC-BY-SA unless otherwise noted.
Advertisement