Dr Slump Wiki
Register
Don't have an account?
Sign In
Advertisement
in: Characters, Characters from other Toriyama works, Humans, Females

View source
watch 01:36
We're Getting Mutants in the MCU - The Loop
Do you like this video?
Play Sound

Pink (ピンク) is the young heroine of the manga and movie Pink. She and Cobalt Blue also make a cameo in the movie Dr. Slump and Arale-chan: N-cha! Love Comes From Penguin Village.

Pink is a little naive, but very effective in combat. Her abilities are diverse: she can drive jet and handle firearms while performing stunts. Since the death of her parents two years ago, she lives in an isolated house with her two friends, a little dinosaur named Black and a robot named White. The problem of drought that affects her region does not seem to bother her, as she spends her time attacking and stealing the convoys of the Silver Company, a company that appropriated all the remaining water and sells it outrageous prices. Pink keeps the stolen water for herself, and uses it essentially for bathing.

Due to her face being concealed behind black goggles, her opponents all assume Pink is a guy. An agent is soon initiated to investigate these thefts and apprehend the bandit, the sheriff Cobalt Blue. He comes across Pink's home, which he finds suspicious as there is a lush palm tree thriving amidst the drought. He asks her a few questions, but comes with nothing despite all the evidence around him. Pink is all too willing to answer his questions as she has become smitten by him. That night, Pink ha a dream about her and Blue walking together with her parents' umbrella in the rain. Pink then comes up with the solution to the drought and heads out to the Silver Company for one last heist.

Pink performs a frontal assault on the company, but is quickly overpowered by a samurai Silver hired to kill her. Just as Silver's men are about to kill Pink, Cobalt Blue steps in and saves her. She quickly tells Blue she is on a mission to rescue the god of rain Gorosuke Kaminari and takes him to the basement where Kaminari is. The good sheriff and the pretty thief team up and ultimately deliver the god of rain, who then proceeds to make up for lost time and produces rain. Unfortunately, he goes overboard and the land ends completely flooded. But Pink finally has Blue all to herself in her parents' umbrella, which they are now using as a boat.

Pink with her parents' umbrella

Pink ready for a battle 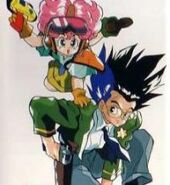 Pink and Cobalt Blue as they appear in the Pink movie 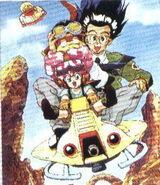