The chapter cover features a photo-realistic Senbei wondering if he had failed, while Arale's head in a Robbie the Robot-like suit asks if she is truly the perfect humanoid robot.

Arale Norimaki comes home from school telling Senbei Norimaki that while changing during P.E, other girls said that she is missing an important body part. Senbei, realizing that she was missing her vulva, tries to talk her out of it while reflecting that he had never seen one due to strict censorship on his perverted magazines. Arale, desperate to have one, suggests he force someone to show it to him. However, he exasperatedly informs her that that is illegal. He instead offers to make her into a boy, and Arale suggests that they just peek at one instead.

Loving this idea, Senbei invents a pair of See-Thru Glasses. The glasses make everything inorganic disappear to the user. After a brief demonstration, they leave the house to try and take a peek. Senbei quickly finds a woman at a bus stop with a cat on her lap, but Arale sees Taro and Peasuke and screams for them to cover themselves, much to their confusion. and awkwardly tries to get it to move to allow him to see underneath it. This results in him being pummeled by the girl. However, Arale grabs the glasses and looks at Taro's penis before Senbei takes them back before Peasuke spies Ms. Yamabuki coming their way. Desperate to see her naked, Senbei rushes to see her from the front, resulting in her hitting him with her motorbike, at which point Arale askes "Did you see her bellybutton?" 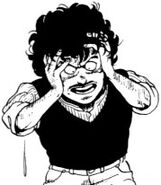