The Birth of Arale! (chapter)

The Birth of Arale! (アラレ誕生！, Arare Tanjō, lit. "Arale's Birth!") is the first chapter of the Dr. Slump manga series.

The chapter cover features a close-up of an anguished Senbei with four miniature "wind-up" Arales crawling over his face.

The story begins in Penguin Village at the Norimaki Residence. In a laboratory, a scientist named Senbei Norimaki is seen working on creating the perfect Android girl. While working on the body, the head tells him that she is bored which Senbei replies by saying he should have done the talking bits last. While he asks the girl to wiggle her arm to test it out, she ends up hitting Senbei in the crotch hurting him. As he finishes up, he puts the skin on and attaches the head where she complains that her chest is flat. After Senbei is impressed by his success the android girl, she says that she is disappointed that he did not build her to fight evil and can not fly. After she tells Senbei that his face looks funny, her eyesight is tested by reading letters which she got all wrong and has to have glasses to see clearly.

Deciding that he can not have the girl wear her pajama's all the time, Senbei goes out to The Store to buy her some clothes. After getting almost all the clothes, Senbei realizes that all he has left to get her is panties. Being self-conscious that the women in the store will think he is some kind of pervert, he comes up with a disguise to dress up as a woman. In the restroom, he shaves his facial hair off and puts on a wig, lipstick and a school uniform that he bought. Once at the counter of the Lingerie Corner, he asks for panties which the lady pulls out a giant pair with an elephant on them getting Senbei mad and saying that they are for someone else.

When he gets back home, his facial hair is notably back and the android girl is dressed in her new clothes. Senbei takes her out to see if his experiment is a success by having nobody notice that she is a robot, which already she starts throwing her head up and down when leaving the house. He takes her to the Coffee Pot where Senbei introduces the girl to Aoi as his sister. When Aoi asks what his "sisters" name is then he gives her the name Arale. While sitting at the counter and asking Arale what she wants to drink, she asks for engine oil but Senbei covers up by saying Juice. She then asks how old Arale is which she responds by saying she is brand new but Senbei once again covers up and claims that she is thirteen. Senbei then tells Aoi to stop with the question but then she notices that Arale has no nostrils but Senbei comes with the counter that they are manga characters and do not have nostrils, which then Aoi looks in the mirror and sees that he is right. When getting ready to leave, Arale runs outside, and a car is knocked over by crashing into leaving everyone surprised. 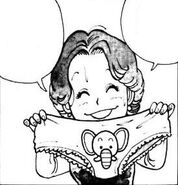 The Store employee with elephant panties
Community content is available under CC-BY-SA unless otherwise noted.
Advertisement