Trampire (ドランパイア Doranpaia) is a vampiress who lives in a castle just outside of Penguin Village and loves blood and money.

Despite the fact that she is a monster herself, she is very put off by the strange creatures going on around her. In her first appearance, she is accompanied by Franken (similar in appearance to Frankenstein) who can transform into a wolfman. Trampire tries to suck Arale Norimaki's blood, but she fails since Arale has no blood because she is an android. She also tries stealing Senbei Norimaki's money, but fails on that as well.

Main article: Volume 7: My Toilet Paper
Trampire and her followers are seen among the residents of Penguin Village following Arale and Gatchan in Penguin Village Dom-Dom-Dom!

Who's the Strongest in the World!!

Main article: Volume 16: Who's the Strongest in the World!!
She is later seen working as a part-time reaper for Enma and is sent to reap Senbei's soul, but ends up getting fired due to Arale's interference.

She can be seen flying by the Coffee Pot in the General Blue Saga's episode Penguin Village.

Trampire is also seen in the 1997 remake. She has blue skin and orange hair, unlike the original version where she has blue hair and white skin. 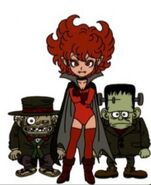 Artwork of Trampire by Toriyama.
Community content is available under CC-BY-SA unless otherwise noted.
Advertisement